Breaking News
Home / News / Is Nigeria’s Oil Industry On The Road To Recovery?

Is Nigeria’s Oil Industry On The Road To Recovery?

Over the past few years, Nigeria, Africa’s top oil exporter, has been beset by a multitude of problems, notably decreased crude production and exports, oil theft and pipeline attacks, stalled economic reforms and recovery, and the threat of oil price volatility. While the Nigerian oil industry has been cautiously optimistic about overcoming these upheavals in 2018, the nation has and will continue to face several acute challenges.

In May 2018, the Nigerian petroleum industry underwent production complications as outages at key pipelines supplying Forcados and Bonny Light grade crudes were out of commission. In particular, the shutdown of the Nembe Creek Pipeline in mid-May, which transports 150,000 bpd of Bonny Light to the Forcados terminal, caused Shell Petroleum Development Company of Nigeria to declare a force majeure on Bonny Light crude exports. Although Shell has declined to comment, there is speculation this shutdown was due to sabotage. Shell lifted the force majeure on July 13th, when repairs were completed.

This shutdown has, in conjunction with the closure of the leaking Trans-Forcados pipeline, which transports 200,000-240,000 bpd, led to further delays and an accumulation of unsold crude. According to S&P Global Platts, these factors caused Nigeria’s oil production to drop by 150,000 bpd from 1.88 mbpd in April, dropping it to 1.73 mbpd in May and 1.72 mbpd in June.

Facing these supply concerns, oil exports are expected to decline further to 1.43 mbpd throughout July. According to Reuters, 48 cargoes of oil exports are expected to be loaded in July, compared with 60 cargoes in June. In July, 20-34 million barrels of Nigerian oil has gone unsold as traders have sought alternative supplies. Marketing Nigerian crude grades has become difficult due to the price spread between Brent and the West Texas Intermediate, which gives an advantage to WTI petroleum over Brent-priced ones.

With unsold crude inventory, Nigeria was less cooperative than its Persian Gulf OPEC compatriots to raise production but acquiesced to Saudi-led efforts to dampen the market. Following this decision, Professor Wumi Iledare, President of the Nigerian Association for Energy Economics, has called for the central government to take steps to boost Nigeria’s production capacity in order to support future participation in OPEC supply increases. If Nigeria is unable to boost production in the wake of this meeting, the supply increase could affect the central government’s revenue, which relies on crude sales for 2/3rds of its budget, and thus the Nigerian economy as a whole. For a nation over-reliant on oil and rated by Brookings to be the poorest in the world, this and other changes to the oil market could have massive domestic ramifications.

Instability in the Niger Delta

For over two decades, oil production in the Niger Delta has faced an insurgency from militants demanding a more equitable distribution of oil revenues and a solution to widespread pollution. The Niger Delta Avengers (NDA), and other insurgency groups have attacked pipelines and stolen crude in order to impact Nigeria’s economic growth and the central government’s oil revenues. In August 2016, NDA reached a tenuous ceasefire with the Nigerian government, but in January 2018, the group pledged to launch attacks on Nigeria’s oil infrastructure.

While oil flows from Nigeria have begun to recover since 2016, security threats have continued. In June 2018, Igo Weli, general manager for external relations of Shell’s Nigeria operations, stated “Security in parts of the Niger Delta remains a major concern with persisting incidents of criminality, kidnapping and vandalism as well as onshore and offshore piracy.” Weli said the company recorded 60 cases of theft in 2017 and 10 in the first two months of 2018.

A resurrection of the wave of violence in 2016, which pushed the Nigerian economy into a recession from which it has yet to fully recover, would be devastating for the nation. In 2016, attacks on pipelines and other oil facilities in the Niger Delta plunged crude production from a peak of 2.2 mbpd to below 1.4 mbpd—the lowest production rate for Nigeria in the last three decades. This, in combination with low oil prices, caused a budget crisis and a massive recession. 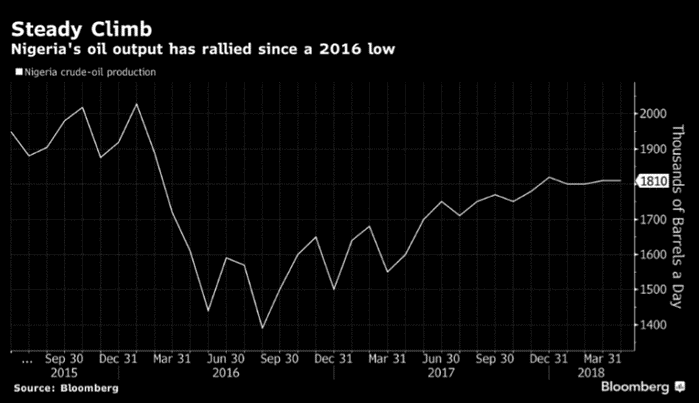 With the Nigerian presidential election upcoming in February 2019, many have speculated whether NDA and other groups will renew their campaign of violence and vandalism. Ben Payton, head of the Africa Research Program at Verisk Maplecroft, believes that while these groups will not entirely abandon the ceasefire, which provides them with amnesty payments, “militants will carry out one or two attacks to demonstrate their continued relevance and push the government into making further concessions.” Any return of instability to the Niger Delta would have serious consequences for Nigeria’s oil industry, economic recovery, and political stability.